There are a number of problems associated with polypharmacy in the ED:

When an older patient is taking a lot of different medications, there are significant changes in metabolism as all those drug molecules compete for the few remaining hepatic molecules to metabolize them.  Adding any new drug can upset that equilibrium. Remember the example of warfarin in the liver: 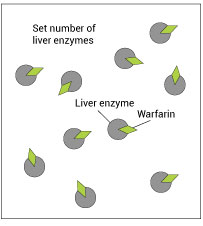 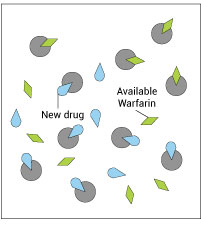 When a new drug like TMP/SMZ, is added, it uses up some of the enzymes previously used to metabolize warfarin. 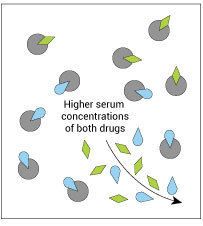 As a result, there are higher serum concentrations of BOTH drugs.

A small change can have a huge effect in a system already working at its threshold.

As the case of Mr. Martini with his long list of medications illustrates, even a small medication change requires the liver to shift enzymes away from metabolizing other drugs. Thus more active drug is left available.

Polypharmacy also highlights the importance of good communication in the ED. If Mr. Martini had been told to expect a change in his INR he could have decreased or even stopped his warfarin. OR if his family doctor had been notified of the addition of the new medication, the family doctor could have started earlier monitoring of the INR. Older, perhaps cognitively impaired patients cannot be expected to “fill in” these blanks. It is the responsibility of the Emerg physician to ensure good communication.

Involving clinical pharmacists has shown to be helpful in the care of older patients with Polypharmacy or who are taking high-risk medications or presenting with adverse drug events (ADEs) in the ED. Communication is enhanced along with improved patient outcomes with inclusion of a pharmacy consult, if available.

When an older patient is taking a lot of different medications there is a risk of treating the adverse effect of one medication with yet another new medication.

When an older patient is taking a lot of different medications there is a risk of unexpected additive effects:  especially with anti-depressants, sedatives, or cholinesterase inhibitors the effect of adding even some ©Gravol or metoclopramide can be much stronger than on its own.

?Question for Discussion:  What examples of Polypharmacy have you seen in your Emergency Department?

Polypharmacy or some kind of medication-related problem often presents atypically. To learn more about this issue, visit the Atypical Presentations module.

Participate in the discusssion by posting a comment below Cancel reply